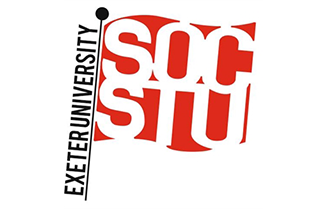 Exeter Socialist Students is a non-affiliate poltical society that aims to aid students and workers and fight for social justice. As a non-denominational leftist group, we aim to be an inclusive safe space for all – regardless of your political position. So whether you’re a diehard anarchist, hardcore Marxist or a fresh-faced Corbynite, we’re the society for you.

Our society participates regularly in campus politics, ranging from activity on the Guild council to demonstrations and debates, with recent examples being helping to organise direct action to aid the UCU strike for better working conditions and equal pay in the 2019/20 academic year, and the protest against Debating Society inviting Katie Hopkins to speak at an event in February 2019. We have also hosted events on the importance of issues such as tackling the rise of fascism and union membership among young people, hosted talks on the histories of regions such as Yemen and Northern Ireland, and invited guest speakers from organisations such as Unite the Union, ACORN, Campaign For Nuclear Disarmament and Extinction Rebellion, encouraging people to get more educated and more involved outside of student politics. We enjoy strong links with societies and organisations interested in activism and social justice, such as Feminist Society, Friends of Palestine, and Labour Students, and often support their campaigns and events however we can. Our society was also pivotal in the formation of Exeter Students Support the UCU Strikes, who supported their teachers and lecturers on the picket lines and occupied the university's administration building for 11 days in solidarity in March of 2018, and continued occupations (such as the 7-day Peter Chalk occupation in November and December of 2019) and presence on the picket line throughout the academic year 2019/20.

We have events every Wednesday in terms 1 and 2, after which we usually head to the Ram for discussion. As a political society, we feel that we can offer a lot to all students, regardless of their politics, and we hope to see you soon!